Note that the x and b vectors are permuted using the fill-reducing reordering used. The permuted solution vector xperm is obtained using forward substitution

Using MATLAB the above can be implemented as

where perm is the permutation vector and Free_ind is a vector holding the indices of unconstrained nodes (see the Boundary Conditions section).

Since the same number of floating point operations needs to be performed in the forward (L\) and backward (L’\) substitutions, in the ideal scenario each step should take the same amount of time. However, in the above implementation the factor L needs to be explicitly transposed in order to perform backward substitution. The additional work causes this implementation to be sub-optimal.

One option is to implement the above using the ‘/’ (or mrdivide MATLAB function). This avoids explicit computation of L’, i.e., only L is used in the MATLAB code:

However, according to the documentation mrdivide performs the transposition of the matrix internaly:

/ Slash or right matrix divide.
A/B is the matrix division of B into A, which is roughly the
same as A*INV(B) , except it is computed in a different way.
More precisely, A/B = (B’\A’)’. See MLDIVIDE for details.

Effectively, both above implementations have the same performance. 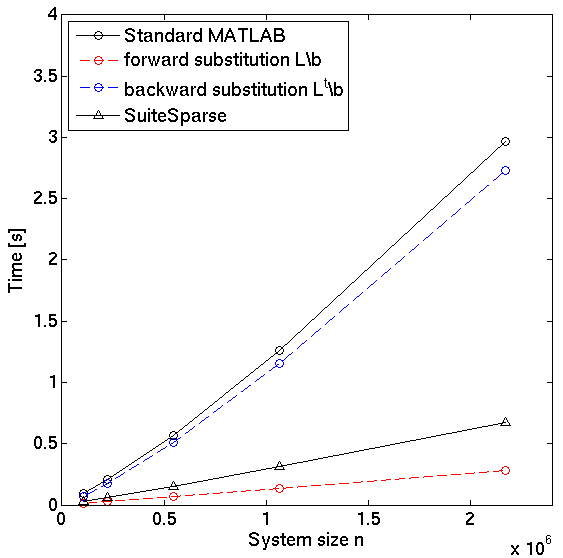